We now draw toward the end of this Season after Pentecost, often called “ordinary time.” Ready or not, Advent is only two weeks away. It is in this “green” Season after Pentecost that we also often call it a “growing time.” Not only is it in the summer months, wrapping up at the harvest, but it is also a time when we hear and learn about Israel and her kings and about the faithful people of God, imperfect as they may be. Any time we engage in scripture, to hear, read, mark, learn, and inwardly digest–as our collect says–we are invited to step into the story wholeheartedly to understand how it relates to us now, even though the distance between then and now, let alone between here and there, is so great. Our learning shapes and grows us, too, in our understanding. While we may be growing on the outside, more likely than not there is also growth and formation happening within us.

As much as people seem surprised to encounter women in the Bible, we do so more often than we might realize. Today’s story of Hannah exhibits this internal and external growth quite well. While it is the conception story of the child who would become King Samuel, it’s not told through the lens of his father or even of the high priest of the time, though both make an appearance. It’s the plight of Hannah, Samuel’s mother that draws us into the tale. Hannah, second wife of Elkanah, is faithful yet barren. Even though she’s childless, she has the love of her husband, who makes no effort to hide his favoritism and seems shocked that his love alone doesn’t satisfy her (as if all she should need is a good man to make her happy, right?!?). Not only does her husband not fully understand her distress, but she is also constantly provoked by Penninah, Elkanah’s first wife who has sons and daughters. In case we’ve forgotten, fertility was considered a gift from God, and even though Penninah provokes her severely, irritates her because she hasn’t borne children, Hannah doesn’t rebuke her. Hannah internalizes her grief. She weeps and fasts, and one day she goes to the temple to pray.

It wasn’t the custom, apparently, to whisper one’s prayers or to pray silently. (Remember the scribes who say long prayers? They probably say them just loud enough to be heard over everyone else so people can make sure they are there.) Hannah is saying her prayers much like I say morning prayer, mouthing the words but not making much noise. Some days my prayers are more fervent than others, and I can only imagine the intensity in which Hannah prayed to God.  And Eli, the priest nearby, sees her and accuses her of being drunk, making a spectacle of herself. Hannah fills in the blanks for him. She knows he thinks her a worthless woman. But with the strength of a hemorrhaging woman seeking healing, with the persistence of a woman seeking an exorcism for her dying daughter, with the audacity of the woman at the well to speak out for herself, Hannah confesses her trouble and grief. She has “been pouring out (her) soul before the LORD.” If Eli is anything like most men I know, when faced with a woman pouring out her soul, her truth, he faces his own inadequacy and knows there isn’t a thing he can do aside from get out of the way or empower her in her own strength. Eli, in his blessedness, offers her a blessing, that God might grant her her petition. He doesn’t need to know what it is. When we are agents of God’s work in the world, we often don’t and most of the time can’t know toward what end we are working.  Whether it’s from Eli or God or both, Hannah seeks favor and goes on her way.

“And her countenance was sad no longer.”

A change has occurred in Hannah even before she conceived. Like Job Hannah persists in her faith. Like many who want something so dearly, she bargains with God, promising her would-be child to be a faithful Nazirite. In keeping with tradition, she names the child so that his story, her story, would be remembered: Samuel, meaning “asked of the LORD.” Instead of a psalm today, we get what’s often called “Hannah’s song,” though it was likely written later and put into her story because it has the exaltation of God and the attribution of might to God, the kind that takes what is and makes it what God would have it be. It’s an inner transformation that also had outward signs. It wasn’t just the growth of a baby bump but also the change in Hannah’s countenance that showed a change had taken place, that some kind of grace had been internalized.

As Episcopalians who believe in sacraments, this is not unfamiliar to us. Sacraments by nature are outward and visible signs of inward, invisible grace. Holy Eucharist and Baptism are our two Sacraments, but we have other sacramental rites, like marriage, confirmation, unction, ordination, and reconciliation. I venture that we have sacramental moments in our lives, especially at births and deaths, when we perceive something of grace a little more tangibly than at other times, when we sense that what is holy has made itself known, if not visible. Even if we want to ignore the sacramental experiences of our lives, we can’t unknow them. It’s a hard thing to deny when the holy breaks into our lives, and I venture to say that it’s a beautiful thing when we facilitate that occurrence.

So what if instead of being provocative like Penninah, irritating those who are already drowning in grief and woundedness, we became provocative like Hannah, extolling the greatness of God? What if we become provocative like the preacher in Hebrews suggests: provoking “one another to love and good deeds, not neglecting to meet together, as is the habit of some, but encouraging one another.” See, there’s a little tongue-in-cheek there, still the chance to irritate one another in a negative way, but there’s a way to provoke one another to gladness, to laughter, to joy, to companionship, toward Christ.

Bp. Tom Breidenthal from Southern Ohio, who was our speaker at clergy conference this year, spoke about the church reclaiming its role in the center of public life, as being part of the body politic in a Christian way, not in a powers and principalities kind of way. He spoke about the early house churches that became basilicas, how the open space in the middle was where everyone gathered for corporate worship, how the side chapels were like the markets and offices that lined the open space. He mentioned Philander Chase, the first bishop of the Ohio Mission Territory and how he agreed with the importance of having the church at the center of public life. I mention this because Pastor Clint Schnekloth mentioned to me that urban planners often don’t have churches in their master plans any more. It’s not part of the grid. When I brought this up to Bp. Breidenthal, he said it just emphasizes the importance of doing work outside of four walls, or even without walls. (Yeah, he didn’t know our story.)

Well, we still have churches in our town, in our community. We have ours now, too. How provocative are we? Are we irritating, arousing anger in others out of spite or to put others down? Are we Penninah-provocative?

Or are we Hannah-provocative? Through our suffering and prayers, do we seek God’s guidance to transform us into agents of God’s will? Do we do the work necessary to change our outlook on life so that rather than put others down we can lift one another up, challenging each other in good deeds and love? So when we see another church doing good work, maybe we can help them reach even more by joining in on their effort, as we’re doing with the Thanksgiving boxes with Community Church (the Nazarene church downtown).

Can we remember all that we’ve learned through the stories of those who have gone before and remember the words of Jesus who continually shows us the exemplar way to be provocative for the will of God? The disciples marveled at the grandeur of the stones of the temple and surrounding buildings, but Jesus told them it would all be thrown down. The disciples hadn’t internalized what Jesus said about the temple having been built by the money taken from the widows’ houses. Jesus may have had to slip through the crowd to escape capture a few times, but he didn’t shy away from proclaiming truth to all who would listen. He would stand in the temple, in a boat, in a cave, on a hill, in the field, in the marketplace, and he would provoke his listeners, inciting in them an emotional response. If they didn’t like what he said, wasn’t it usually because they had something to lose, some attachment, possession, or power they didn’t want to sacrifice. If they were already weak, oppressed, or downtrodden or maybe even open-hearted and adventurous, the words of Jesus had a way of landing in their heart and mind and drawing them nearer to him, encouraging them to follow him along the Way.

How do the words of God provoke us today? How does the Eucharist speak to us? How are we empowered to go forth and incite the love of God in the world around us? Even if we, like Hannah, offer our prayers in silence, our actions will speak loudly to our faith and hopefully provoke others in a good way, too.

On Conversion and Climbing Trees

The #blessed, the righteous, the thankful 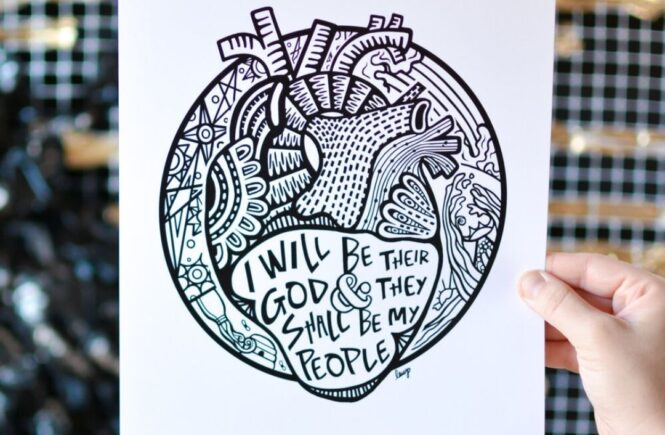 Again & Again: We are being Reformed