Words to Live By

Back when we had the Works of Light series in Epiphany during Christian Education, Cathy Luck came and spoke to us about a local program modeled after the Magdalene House (Oasis NWA), and Deacon John Reese spoke to us about efforts to get an Oxford House started. Both of these programs helps people who might otherwise be homeless. The Oxford Houses are specifically geared to be homes for those in recovery. They’re not halfway houses or transition homes: they’re an Oxford House, which brings with it nationwide credibility and accountability. Places like this are desperately needed not only because affordable housing is a critical need but also because addicts who are striving each day to stay in recovery are among a very vulnerable population. If ever a time we needed to step in and offer assistance, it’s now. I learned just this weekend that as far as mortality rates go, the mortality rate in working-age adults has actually risen, in large part due to the opioid crisis. We need homes like these to help people who are pushed to the margins, forgotten about, and sometimes even left to die. I’m reminded of the Collect for the Day: “we have no power in ourselves to help ourselves.”

The Oxford House is a successful model in large part because they have a 43-year history of refining details that work to help. About 80% of their folks stay clean, and they never remove someone from a house unless they break one of the three rules. The basic rules are: 1) participate in the democratically-run house; 2) stay clean–zero tolerance for relapse; 3) share in chores and expenses. That’s it, and the houses are financially self-sustaining by the rent the residents pay per week. Now, they probably also have further charters or agreements particular to each house, depending on where they live, but the ground rules are set, rooted in the nine traditions of the Oxford House program. These rules and requirements create a safety net and an accountability network that helps people stay clean–in body and house (they really are particular about keeping a clean home!).

Likewise, in the Magdalene House model, the are 24 Principles that the women of the house follow, things like “cry with your Creator,” “find your place in the circle,” “forgive and feel freedom,” and “laugh at yourself.” These principles shape the sense of who each woman is in the house community but also helps form the important Circle with consistency and intention, deeply rooted in listening to self and other around a single candle.

So when I hear about Moses receiving the words of the Ten Commandments (and I have to try hard not to just picture Charlton Heston with his white beard and outstretched arms holding stone tablets!), I absolutely hear them as law coming to the people of Israel as a means of helping them survive so that they’ll make it to and through the Promised Land to live out their lives and that of their descendents as faithful chosen ones. These are their rules to live by, though they’re not the only ones. They begin with “I am the LORD your God.” God is making sure God’s people know that it is He who has delivered them from Egypt, and it is only God who will keep the covenants with them. God is the only God they’re to worship–not that there weren’t other gods to contend with in the polytheistic culture they lived in–but that this God is the only one for them. These Ten Commandments are basically broken down into the first four being about duty to God, in believing and trusting in God, and about duty to neighbors, in loving them as ourselves and doing to them as we would have them do to us. The Catechism in our Book of Common Prayer offers more of a present-day read on the Commandments, because it turns out that these laws remain valid in our Christian life. As the Jews did, we’ve done, too: we’ve added a lot of charters, agreements, and even unspoken rules and cultural norms.

But at the Interfaith workshop at Hendrix I went to yesterday (“Cultivating an Interfaith Mindset in Rural Arkansas”), Dr. Jay McDaniel pointed out that when we’re trying to understand people from different faith traditions, we don’t go up to them and ask them what their 10 guiding principles are; we don’t say, “What are your 10 Rules for being x?” If we do, we might get a sense of why the do/don’t do what they do, but we lose sight of who they are in relationship with others around them.

When Jesus entered the temple and fashioned a whip bound by his righteous anger, he cleared the place and overturned the tables. It was all wrong, apparently. Often we hear that Jesus was angry because people who come to make sacrifices have been taken advantage of, being forced to pay inflated prices for whatever it is they needed. (I liken it to having to pay for gas at the only gas station for 50 miles; convenience comes at a price.) But this year I read this as Jesus clearing it all out. All the material, all the consumerism, all the stuff that also includes the ridiculously complicated laws/rules/requirements for living and practicing a faithful Jewish life. I say this because Jesus clears the temple and then draws the attention to the true House of God in their midst, his own Body, the Temple that will be destroyed and risen again in three days. This doesn’t make sense to anyone, and they would rather have a miraculous sign now. But Jesus has given them a sign, told them what to look for. When they look back on this moment, the disciples remember his words. Jesus’s whole ministry has been about providing signs, working miracles, showing the incredible power in their midst–if only they had eyes to see and ears to hear, if only they weren’t so jaded in their self-perceived wisdom.

In the human body the Divine worked to break down the boundaries and barriers that all the laws and rules and regulations had created. Jesus supped with tax collectors and sinners. Jesus defended the accused, healed the leperous, spoke with the outcast even if it was the opposite sex, and never turns away anyone who recognized the Life and Love he offered. Jesus tells them and us what the most important commandment is: to love the Lord our God with all our heart, mind, soul, and strength. We’re also to love our neighbors as ourselves. It really hasn’t changed, though everything changed with Christ. In Jesus Christ, God gives us our new covenant that knows no boundaries. In Jesus Christ, the new word that God gives God’s people is Love, Love revealed to us in the Word made flesh.

And how are we doing with that?

In Northwest Arkansas we have a child poverty rate of 27%. While homelessness in Arkansas statistically had dropped 10% since 2010, there are still just over 2,400 homeless in Arkansas, if the counts have collected everyone. The nation-wide Poor People’s Campaign–and we have the Arkansas Poor People’s Campaign in our state–there’s a call for a moral revival because the sins we’re living with now aren’t market extortion for sheep and cattle and doves but the sins of hunger, fear, and poverty. And if we look to the children, about one in three reflect that we’ve fallen behind in duty to our neighbor, and we’ve fallen behind on that because we’re obviously having a hard time with our duty to believe and trust in God. We’ve become pretty good at being self-sufficient at the surface level; most days the market’s going just fine. But the currents of fear that ripple through are eating away at our hearts. For all the measures of success, we’re having to turn a blind eye to more and more of the signs we have now that we’re forgetting our greatest Word: Love. We’re forgetting Jesus Christ.

Maybe we’re waiting for Jesus to come back with a great whip and clear the marketplace and make all things new in a great dramatic show. But in three weeks, we get to recount the Passion that Jesus underwent. If our heart, souls, and minds have been marked by Jesus Christ, when we experience the Passion, we don’t want anything like that to happen again. We certainly don’t want to be an advocate for it. Yet each fatal shooting, each overdose, each homeless, each hallowed face from hunger, each chronically ill and uninsured, each uneducated mind is a sign to us that we’ve put other gods before our God and that the Word God gave us in the Body of the Son, well, there are more important things that have to be done. That’s not the love Jesus brought to our awareness. That “take care of me first” kind of love actually reduces God’s place, and, again, we see signs of that at every corner, in every report about society and environment.

“We have no power in ourselves to help ourselves.” Thankfully God gives us the power through Christ and the Holy Spirit. But first we have to open our hearts and minds and souls to receive the Love that God gave and continues to give and have to courage to change everything because of that Word, that Love.

The Lord is With You 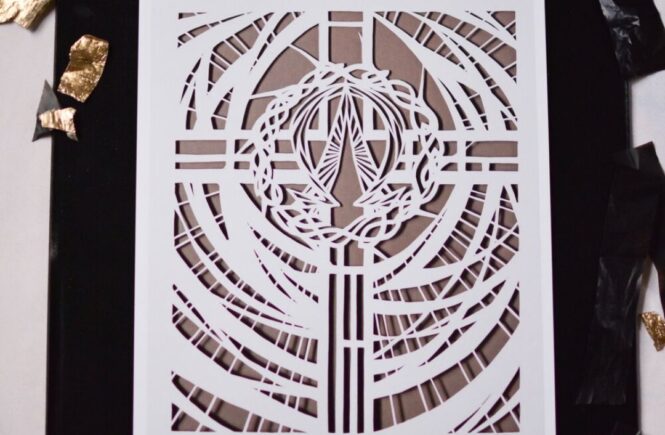 Again & Again: We Find Ourselves Here