Can You Imagine: Forgiveness & Judgment

We’re going to save Moses and the parting of the sea for another day. It warrants a sermon of its own, given all the implications of the miracle at the beginning of the Exodus, especially that of a God that not only sanctioned the death of the firstborns but now also wiped out the pursuing Egyptian army. Today we’ll address our Gospel and Epistle topics of judgment and forgiveness. At the Continuing the Conversation on Wednesday, where 18 folks gathered to talk about racism– representing at least 5 different Christian denominations–one of the women said that given the need for dialogue and discussion, she didn’t feel like she had the tools to engage with people, the language to use in regards to having conversations regarding privilege and race. How could she give voice to where she’s coming from while respecting whomever she’s in conversation with? If we are filled with an understanding of judgment and well-stocked in forgiveness, aren’t these significant components pertaining to full reconciliation? I believe they are.

We want guidance and instruction, right? Peter asks Jesus: How many times am I to forgive? Is seven enough? (Because surely that’s more than generous.) Like us, Peter wants to make sure he’s doing the right thing and that it’s quantifiable, a transaction. Someone does you a wrong, you forgive them. The parable set forth shows a master who forgives his slave, yet the slave doesn’t show the same forgiveness to another. We can keep track of the forgivings and the withholding of forgiveness. This is what I call human economy: we can keep track of what’s going on, who owes who, and where we stand in relation to what’s expected. But Jesus . . . in response to Peter, Jesus says we’re to forgive 77 times, not that we’re going to actually count that many (if we could even keep track) but because

we’re not supposed to be counting in the first place.

Jesus sees our humanity and knocks it out of the park into God’s economy, where we try to comprehend terms like grace, mercy, unconditional, and infinite. We’re not supposed to keep track; we’re just supposed to keep sharing God’s grace.

But this storyline of the master and slave we have, it’s familiar to us. I can’t help but think of Beauty and the Beast–the Disney versions, of course, how at the end after Gaston has led the charge into the castle and tangled with the beast on the rooftop: the beast is given the opportunity to kill Gaston. He shows an act of mercy, telling Gaston just to go. What is he thinking?!? We’re proud and amazed at the compassion shown by the beast, and when Gaston pulls a gun on him (in the newer version — whole scene around minute 5:00), we see the injustice of it all flare and aren’t exactly disappointed when Gaston falls from the castle roof on his own. We breathe a sigh of relief at the happily ever after. When it comes down to it, it’s hard for us to comprehend forgiving someone who has wronged us. We are the master in the parable when it comes to withholding forgiveness or even taking it back. We make our human judgment calls on who is worthy or not of our forgiveness, forgetting what Jesus tells us and what Paul elaborates on: that it’s not our place to judge.

We joke about judging one another: I’ll ask you not to judge the cleanliness of my house when you come for dinner or my car if I give you a ride. We’ll more seriously ask not to be judged on the basis of our family system, our sexuality, our ethnicity. We’re not to cast judgment, but we make judgments all the time, discerning what to do or say in the next moment. Our decisions reflect the judgments we make. But what Paul tells us is basically: don’t sweat the small stuff and leave ultimate judgment to God. It’s our job to show God’s grace and mercy to others by staying in relationship with them, to the extent that we can. God isn’t telling us to stay in dangerous situations. God certainly isn’t telling us to forget. Forgiving someone does not mean we forget. We learn from our mistakes and know the burden of our sins. The knowledge we glean and the relief we experience are worth the scars we bear, and we can’t forget the stories of why we are better for what we’ve overcome. Even if we can’t stay in relationship with those who have done us wrong, we can stay in relationship with God as we work to let go of what was wrong and move toward life and love.

There’s a song in the Hamilton soundtrack about forgiveness. (Yes, I told you I love the soundtrack!) At the Garland County Jail, in the program I did with the folks there,  I wanted to play this song so we could talk about all the levels of forgiveness. But I realized they wouldn’t have any context if they didn’t know all the stories involved, all the references made. Did they know what Alexander was going through, the significance of this proud man using his wife’s words? Did they know Eliza’s grief of finding out about her husband’s past affair and then shortly thereafter losing her son when he died in a duel? Did they know how trusting and kind Eliza was? How deep the betrayal and how true her love? So, we had to listen to the whole thing. 😉  And when it came to the song about the unimaginable and forgiveness, there was stillness in the room, both times with the men and the women. In this song called “It’s Quiet Uptown,” the relationship unfolds in this confession, of not being afraid to admit what was wrong, and this willingness to be in relationship, to return to relationship. All the while, the company sings the chorus as witness to this beautiful thing unfolding with the words: “Can you imagine? . . . Forgiveness . . . Can you imagine?”

It’s hard for us to imagine forgiveness in the face of the horrible. Such swift judgment affords us the death penalty, just cause, self defense. We are absolutely amazed and in awe when not just in movies but in real life, people show true forgiveness and leave judgment to God. A prime example can be found in the survivors of the families who were killed at the AME church in Charlston in 2015, like the families of the children killed at the Amish school shooting in Lancaster in 2006–people who chose to relinquish the burden of judgment, giving that to God. Whatever their reasonings for doing so, I know that their decisions enable them to  move forward in their grief with a foundation of love. And it is hard to imagine, because it’s not the way of our world.

In the face of another acquittal for a police officer who shot and killed a black man, people in and around St. Louis demonstrate–literally–how difficult it is to stay in relationship with one another. On the way to church this morning, I heard a St. Louis alderman speaking on NPR about the peaceful demonstrations that are happening and the pockets of violence that erupted. His voice portrayed his fatigue, along with his words that said he was extremely frustrated by the same pattern repeating itself and not for the first or second time. What he sees reflected in the outcomes is a reinforcement of the message that black lives don’t matter, that they are not valuable. But he did seem encouraged at the unification of many in the area who were showing their solidarity and support for black lives. Maybe not all hope was lost.

Forgiveness doesn’t mean we sit idly by while injustice continues, whether it’s race relations, domestic violence, or any other of our societal maladies. Giving judgment to God doesn’t mean we abandon all responsibility. WE are the hands and feet here on earth sharing the presence of Christ. We don’t have to judge others, but we do have to discern what is right and wrong and choose how to best convey the presence of Jesus to the world around us.

And it often involves taking yet another long look in the mirror and making sure we forgive ourselves. However easy it may be for us to forgive others, sometimes we bear the hubris of not seeing ourselves as worthy of the generosity we extend to others. I’ll be infinitely patient with you and forgive you a million times over, but I don’t cut myself any slack. I have to be very intentional with myself, reminding myself how worthy I am of the love and compassion that others need just as much as I do. I have to remind myself that my relationship to God is only as healthy as I let God’s grace flow through me and others. Can you imagine what our town, our world would look like if we turned to one another with understanding of all our heartaches, all the sufferings, and let ourselves move toward forgiveness, toward reconciliation in safety and love? I can imagine it because I believe in Jesus Christ and the power of the Holy Spirit, which have already accomplished the unimaginable. 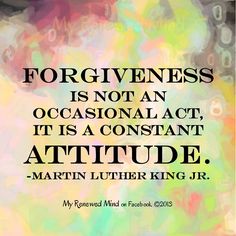 Teach Me the Way