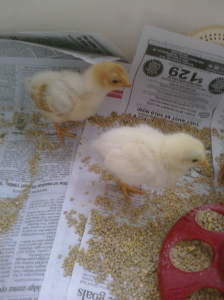 Chickies!  (As Autumn so gleefully calls them.)

Yes, thanks to a city ordinance, we are allowed to have four hens.  Our hope, of course, is to have eggs sometime after fall and ever after.  But, we are learning very quickly that one doesn’t just get chickens and have eggs.  You get chicks, have to raise them, checking them ever so often to make sure they’re not getting sick or dying, and make sure their living environment isn’t disgusting and that the cat and dog don’t get in.  We’ll have to build a coop outside soon.

Oh, wait?  You didn’t know they have to be kept above 80 degrees F?  Well, they do.  So right now our bathroom feels like a sauna (which has its advantages, if you can get past the scent of chickens).  We have six chicks in our whirlpool tub, and my husband has his giggles about that, for sure.  When they are big enough and when it’s consistently warm enough, we’ll be moving them outside.  Fortunately, Spring Break is right around the corner, so we’ll take this on as a family project.

The first dramatic thing that happened was that one of the chicks had “pasting.”  Before we knew it was dangerous, we just fondly called the chick Dingleberry.  Fortunately, after what I’m sure was traumatic cleaning for the chick, the name is the only thing that stuck.  🙂  Autumn has interpreted the name and Jingleberry recently.  Of course, now we don’t know which chick it was since it recovered well and is healthy and thriving like the other three that look the same.  We may just have to come up with two more -berry names! 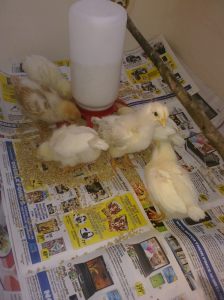 The next thing wasn’t so much drama as it was wanting to improve their quality of life.  I added a perch to their set-up.  Give them a little diversity, you know?  They loved it immediately.  I do have to check in on them sometimes to make sure they’re not playing king of the mountain.  As they grow, the space available is shrinking.  They are growing rapidly.  In a day it seems like their new feathers get longer.  These photos are from last week.  It really is amazing, and I have to watch myself, making sure I don’t spend too much time checking in on them.  Lucky for me I have at least two kids who are content to watch them for as long as I’ll let them. 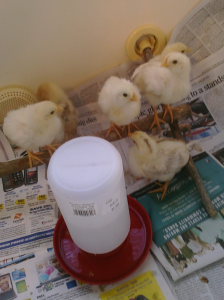 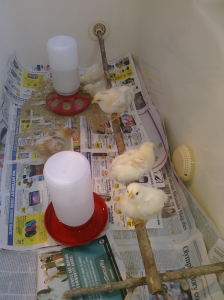 Aside from getting all in order to build a coop, our next concern is that they’re about to fly out of the tub.  One has already figured out how to get on top of the waterer (just the water, not the food yet).  Avery said one got out of the tub last night, but I’m hesitant to believe it fully until I see it happen without a child around.  It is possible, though.

Our over-arching concern is that they won’t all be hens.  Roosters aren’t allowed in the city.  Red and Dino are the only two with distinct markings to be able to tell them apart enough to name.  May they all be hens.  We have friends who would be happy to have a couple of hens, too.

If you’re interested in raising some chicks, my dearest found BackyardChickens.com.  Great information there (how we saved Dingleberry’s life!), and good luck to you.  If you’re not interested, you’re welcome to live vicariously through our venture.